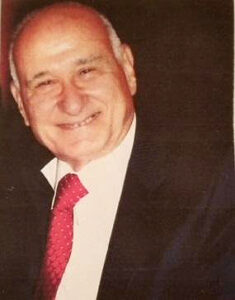 “Edmund was a passionate, dedicated physician, who was tireless in his efforts to guide his family, minister to his patients and pursue his research interests which led him to develop friendships throughout the world. So typical of Edmund was his never-ending caring for his patients whom he expressed concern about, last week, even while he, himself, was hospitalized,” said Lawrence V. Najarian, MD, AAHPO President (see more tributes from AAHPO members in the right column).

The family will receive their friends on Saturday, February 5th from 2:00p.m. to 6:00 p.m. at the Frank A. Patti and Kenneth Mikatarian Funeral Home, 327 Main Street, Fort Lee, NJ.

The family will receive their friends on Saturday, February 5th from 2:00p.m. to 6:00 p.m. at the Frank A. Patti and Kenneth Mikatarian Funeral Home, 327 Main Street, Fort Lee, NJ.

Classically trained in Cairo, Egypt, Edmund attended College De La Salle and Cairo University. After immigrating to the United States in 1968 he completed his Pathology fellowship at Albert Einstein Medical Center in Philadelphia, PA. He completed his internship at West Jersey Hospital followed by his Psychiatric residency at Thomas Jefferson University in Philadelphia, PA. He then completed a research fellowship in Clinical Psychiatry at SUNY Downstate Medical Center.

He married Therese Kavoukian in 1969 and they welcomed their daughters Nayiri the next year followed by Taleen two years later.

Edmund was Clinical Director at the South Beach Psychiatric Center in Staten Island, NY and had been the Chief Psychiatrist at the Staten Island Developmental Disabilities Services Office until present. In addition, he was an attending Psychiatrist at the New York Armenian Home in Flushing, NY until it closed. All the while with a part time private practice in Psychiatry and Energy Work.

A humanitarian with a deep interest in human rights, Edmund participated in several missions of mercy trips to Soviet Armenia following the earthquake in Armenia in 1988, specifically to Yerevan, Spitak, Kirovakan and Karabagh. He was awarded the Humanitarian Assistance Award by President Levon Ter-Petrossian in 1994, the Outstanding Achievement Award from the Armenian Behavioral Science Association, Recognition Award from the Armenian American Society on Stress and Genocide and finally the AAHPO Service Award for his hard work and selfless dedication.

In 2018, Edmund donated to the National Association for Armenian Studies and Research (NAASR) one of the most significant archives of documents relating to the Armenian Genocide–the archive collected by his uncle, the late Fr. Krikor Guerguerian–for research and study in NAASR’s Mardigian Library at Clark University.

Edmund is survived by his wife, Therese, their daughter, Nayiri Mesrobian son-in-law Viken Mesrobian, their daughter, Taleen Gergerian (who serves as Executive Assistant to AAHPO’s Board of Directors) and beloved grandchildren Tatiana, Jack and Haig.

The family has requested that In Lieu of Flowers donations be made to AAHPO, Sts. Vartanantz Church and St. Gregory Armenian Catholic Church.

Dr. Gergerian was a founding member of the organization that was a precursor to AAHPO and served as a long-time Board Member of AAHPO. “Edmund was a strong Armenian who answered the call during Armenia’s darkest hours. Both he and fellow AAHPO Board member, the late Haikaz Grigorian, MD, went to Armenia to assist with earthquake relief (see photo, above right) and later, organized the psychiatric community in a series of symposia, including the 2009 Armenian Medical World Congress held in New York City.

“Edmund was a believer in the potential of the collective, positive impact Armenian physicians, working together, could have on our community and worked hard to achieve this goal. Edmund’s support, at a critical time in AAHPO’s history, laid the foundation for this organization’s success as we know it today. His hard work and selfless dedication to AAHPO’s mission enabled him to help our community in new and exciting ways and earned him the AAHPO Service Award. Edmund was a very special person and he will be missed but his dream of improving the health of our community will live on.”
— AAHPO President Lawrence V. Najarian, MD 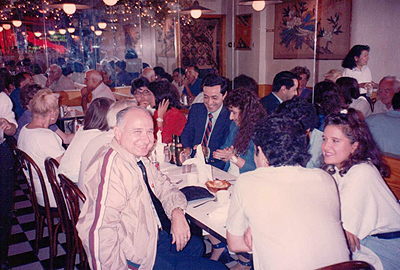 “Edmund was one of the most amazing, wise and decent fellows we know. Edmund was an avant- garde psychiatrist using 20 years or more ago advanced complementary and integrative techniques which now have become mainstream.We are especially thankful for his introducing us 20 years ago at a n AAHPO meeting to the research and writings of Bruce Lipton PhD, medical school cell biologist, whose research debunked the notion of fixed genetic inheritance creating reality. Nowadays you can see Bruce Lipton on Amazon prime ‘Health’ and ‘Inner Evolution’ series. Edmund will be dearly missed.”
— AAHPO Board Members Louiza Puskulian-Kubikian, DDS and Arthur Kubikian, DDS

“We are heart sick and broken hearted to learn of your Edmund’s passing. There are no words but only love and consolation that we can offer to the family at this difficult time. In this darkest of hours, let us also celebrate the life Edmund lived, for us all and for his patients.”
— AAHPO Board Member John P. Bilezikian, MD

“Dr. Edmund Gergerian, like so many, I always think of you as “Saint Edmund”—a gracious scientist, always seeking ways to use your gifts to benefit others. Like your legendary uncle Krikor, you have blessed everyone around you for years Edmund. You are a gifted ‘go-to’ scientist across so many modes: psychiatry, the healing arts, EMDR, biofeedback, facial expressions. We recall back in 1995 in the NYC Sheraton Center, a room full of Armenian Behavioral Scientists heard you speak, then saluted you with its 1995 ABSA Outstanding Achievement Award. Attached is your name on the list of 37 distinguished scientists, and an account from the 1995 Armenian Reporter. For years, my Takooshian family members are immensely grateful to you Edmund, for quietly using your healing skills to aid ailing Dorothy, Edward, Susan, and me. With your heart for service, you have made yourself a treasure among many families as well as your own dear family. You inspire us all Saint Edmund.”
— AAHPO Member Harold Takooshian, PhD
God so loves cheerful givers, and blesses them -2 Corinthians 9:7.

“Dear Harold, thanks for the wonderful tribute to our friend St Edmund! I join you to second this tribute and share that I love and appreciate Edmund! May God Rest his soul, and may his journey be paved with angels and light. He was a light, an amazing healer, always growing, serving, and helping others grow with him. Dr. Edmund was a friend, mentor, brother and teacher. He had a beautiful heart of a generous, mindful, and grounded healer. We will always remember his integrative approaches to healing, service, passion, faith, & compassion!”
— AAHPO Member Dr. Ani Kalayjian