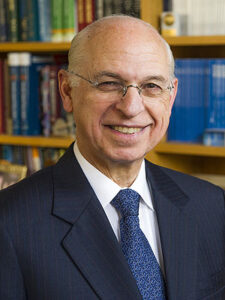 Dr. Bilezikian, the Dorothy L. and Daniel H. Silberberg Professor of Medicine and Professor of Pharmacology at the College of Physicians & Surgeons, Columbia University is Vice Chair of the Department of Medicine for International Education and Research and Chief, Emeritus, of the Division of Endocrinology. He is Director, Emeritus, of the Metabolic Bone Diseases Program at Columbia University Medical Center. Dr. Bilezikian received his undergraduate training at Harvard College and his medical training at the College of Physicians & Surgeons. He completed four years of house staff training (internship, residency and Chief Residency) on the Medical Service at Columbia Presbyterian Medical Center. Dr. Bilezikian received his training in Metabolic Bone Diseases and in Endocrinology at the National Institutes of Health in the Mineral Metabolism Branch under the tutelage of Dr. Gerald Aurbach. He belongs to a number of professional societies including the American Society of Bone and Mineral Research, of which he served as President (ASBMR), 1995-1996 and the International Society of Clinical Densitometry, of which he served as President, 1999-2001.

He is a member of the Endocrine Society (ISCD), the American Federation for Clinical Research, the American Society for Clinical Investigation, the Association of American Physicians, the American Association of Clinical Endocrinologists, the American Society for Pharmacology and Experimental Therapeutics, and the American College of Endocrinology that has designated him Master. He served on the Board of Governors of the International Osteoporosis Foundation (1999-2015) and is a current member of its Committee of Scientific Advisors. He is Chair of the Endocrine Fellows Foundation. He served as Editor-in-Chief of the Journal of Clinical Endocrinology and Metabolism and as Senior Associate Editor of the Journal of Bone and Mineral Research. He is Executive Advisory Editor of Bone Research.

His books include Editor-in-Chief of The Parathyroids [1994, 2001, 2015], and co-editor of The Aging Skeleton (1999), Dynamics of Bone and Cartilage Metabolism (1999, 2006), Principles of Bone Biology (1996, 2002, 2008, 2018) and Osteoporosis in Men (2010). He is Editor-in-Chief of the Primer on the Metabolic Bone Diseases and Disorders of Mineral Metabolism (2018). He has been on numerous panels, including serving as Chair of the NIH Consensus Development Panel on Optimal Calcium Intake (1994), Co-chair of the last three International Workshops on Primary Hyperparathyroidism (2002, 2008, 2013) and of the first International Workshops on Hypoparathyroidism (2015) and Controversies in Vitamin D (2017). He is a major national and international spokesperson for the field of metabolic bone diseases. Dr. Bilezikian’s major research interests are related to the clinical investigation of metabolic bone diseases, particularly osteoporosis, primary hyperparathyroidism and hypoparathyroidism.

His studies of parathyroid hormone in these disorders with regard to etiology, clinical manifestations, pathophysiology, mechanisms of skeletal involvement, and therapy are known throughout the world as landmark contributions to our knowledge of these disorders. He has been continuously funded by the NIH since 1974. Over 800 publications speak to these active original investigative initiatives as well as his authorship of many reference sources of endocrinology and metabolic bone diseases.

In 2017, was named Honorary Member of the Russian Osteoporosis Association. Dr. Bilezikian has received Lifetime Achievement and Recognition Awards of the California and Boston Armenian American Medical Societies and the Armenian American Health Professionals Organization (AAHPO). In 2017, he received the Doctor Honoris Causa Award from the Carol Davila School of Medicine in Bucharest, Romania and from the University of Pisa, in Pisa, Italy. He received the Distinguished Physician Award of the American Association of Clinical Endocrinologists in 2018. He received the Ellis Island Congressional Medal of Honor in 2018. Also, in 2018 he received a Parliamentary Medal of honor from the Government of Armenia for distinguished service. He will receive a similar Congressional Medal from the Government of Brazil in December, 2018.